By : immigrationlaw | Category : Latest News | Comments Off on Paul Parsons Pro bono – Detention of refugee mothers with their children

This was the case for a woman from El Salvador, who had been detained at Karnes with her 19-month-old toddler until she was released on bond last December. Austin-based immigration attorney Paul Parsons, who was representing the woman pro bono, said she’d been through “unspeakable” domestic violence and was also subjected to gang violence. While most bonds for women hoping to leave Karnes are set at $2,500 to $10,000, the judge overseeing Parsons’ case set his client’s bond at $1,500. “It’s unconscionable that our country is detaining mothers and children who have never been accused of any crime,” Parsons said. “They’re locked up like criminals, when under our asylum and refugee laws, they have a right to present their claims to a judge. It makes no sense that we would detain children, and these mothers.”

Detention Of Asylum Seekers Contrary To Past DHS Policy 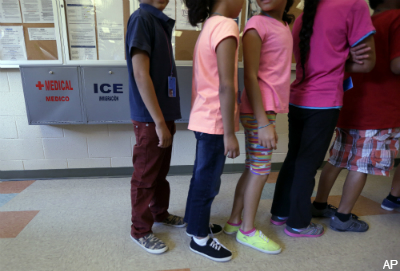 Detained immigrant children line up in the cafeteria at the Karnes County Residential Center, a temporary home for immigrant women and children detained at the border, in September 2014.

The letter, which was posted online last Tuesday, alleged that some mothers at the Karnes County Residential Center had been detained for nearly 10 months, despite having shown a credible fear of persecution during interviews with asylum officials, according to a translation by Law360.

Signed by 78 women, the letter said some mothers had been denied bail, while others had received bail too high for them to pay. In addition to the hunger strike, the women vowed to not work in the facility or send their children to its school. About 40 to 46 women ultimately participated in the hunger strike, according to legal immigration assistance group Refugee and Immigrant Center for Education and Legal Services, or RAICES.

The hunger strike ended on Saturday, as it was intended as a “Holy Week fast,” according to RAICES representatives. But in a video message posted by the organization on Monday, a woman inside the Karnes facility said the fast would continue in three or 10 days if U.S. Immigration and Customs Enforcement hadn’t provided the women with any solutions.

ICE denies that the fast took place, calling reports of the hunger strike “false allegations” in a statement sent to Law360. The agency said that all residents of the facility are now eating, at either the dining hall, common areas or through the commissary.

The alleged hunger strike raises questions about the resurgence of family detention, and the continued confinement of women with potentially solid asylum claims. Extended detention of mothers who have shown a credible fear of persecution wasn’t a DHS practice until quite recently, according to immigration law professors.

Holly Cooper, an associate director of the Immigration Law Clinic at the University of California Davis School of Law, cited a 2009 ICE memo stating that newly arrived immigrants who have shown a credible fear — and who aren’t dangerous or a flight risk — should generally be paroled because their continued detention is “not in the public interest.”

“There’s not a categorical release policy, but there’s definitely a policy in favor of release for asylum seekers who have passed the credible fear phase,” Cooper told Law360. “And that’s been in place for as long as I’ve been a lawyer.”

Asked if last summer’s large increase in border crossings by unaccompanied children and other immigrants had anything to do with ICE’s backtracking on its release policies, Cooper said it “absolutely” did.

“I’ve been working with this population my entire career, and I’ve never seen … a government policy, so disparately enforced on such a vulnerable population,” she said. “And it’s really tragic.”

Mary Holper, the director of the Immigration Clinic at Boston College Law School, said that alleged reversal to is owed to the “political liability of having just so many people crossing the border all at once.”

Holper said that most women being detained likely aren’t a flight risk, as they passed the stiffer credible fear screenings instituted last summer, and therefore may have strong asylum cases that they wouldn’t want to jeopardize by missing a hearing.

“Bottom line is, if they have a decent enough asylum case, they have a reason to go back to court,” Holper said. “I mean, there’s no way they would risk that whole case, and having to turn around, and be sent back into the arms of their persecutors, by not showing up in court.”

She added that it’s likely that many of the women who participated in the alleged hunger strike at Karnes likely have a strong case for being released, as they may have claims based on domestic violence, giving them solid footing for an asylum bid.

This was the case for a woman from El Salvador, who had been detained at Karnes with her 19-month-old toddler until she was released on bond last December. Austin-based immigration attorney Paul Parsons, who was representing the woman pro bono, said she’d been through “unspeakable” domestic violence and was also subjected to gang violence.

“It’s unconscionable that our country is detaining mothers and children who have never been accused of any crime,” Parsons said. “They’re locked up like criminals, when under our asylum and refugee laws, they have a right to present their claims to a judge. It makes no sense that we would detain children, and these mothers.”

ICE was unable to immediately respond on Monday afternoon to Law360’s inquiries about compliance with the 2009 memo, but the agency provided a statement from Public Affairs Officer Shawn Neudauer, who said ICE “makes custody determinations on a case-by-case basis.”

The detention of families has become a high-profile issue, with American Bar Association President William Hubbard issuing a recent letter asking DHS to stop detaining families except in the face of “truly exceptional circumstances.”

The hunger strike at Karnes also came roughly a month after a Washington, D.C., federal court blocked the government from detaining Central American mothers and children with credible fears of persecution in order to deter future immigration. DHSrecently asked the court to reconsider its injunction, saying its scope was too broad.

Jonathan Ryan, the executive director for RAICES, said that while the injunction was a moral victory, as a practical matter ICE simply began imposing oppressively high bonds, instead of opposing bond in all cases.

“Unfortunately … the injunction raised the hopes of a lot of the women, which then caused all of their hopes to be dashed when ICE simply just assigned all of these high bonds, or maintained the bonds that the judge had already given,” Ryan said.

Some reports said the women at Karnes were placed in isolation with their children after the hunger strike began. Ryan told Law360 that the women who were brought into the isolation rooms were written up as being the “instigators.”

A statement provided by ICE said that its residential facilities “do not have solitary confinement areas.”

Bob Libal, the executive director of advocacy group Grassroots Leadership, which posted the letter online, said the women’s hunger strike was a way for them to draw attention to their prolonged detention and conditions. Libal added that he believes there’s growing pressure on the Obama administration to do something to shift its policies and end family detention.

Ryan agreed, saying that it’s really up to ICE Director Sarah Saldana to change this policy.

“She came in after this policy was put into place,” Ryan said. “She’s a mother, she’s a faithful person  — and, you know, this would be her moment to shine.”